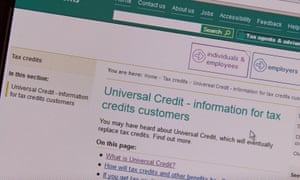 Ministers sat for nearly a year and a half on research that revealed that tax credit claimants experienced “real financial problems” after they signed on to universal credit, it has emerged.

The joint Department for Work and Pensions (DWP) and HMRC study, which examined how tax credit claimants coped with the move, found 60% of those who said they struggled to pay bills said their difficulties began when they moved on to the new benefit.

More than half of claimants reported that the routine six-week wait for a first payment took them by surprise, and nearly half of those who were expecting a delay underestimated by a third how long the wait would be.

About half of those surveyed did not have sufficient savings to tide them over the six weeks, the study found, and this group struggled especially. A few claimants endured “considerable stress” after payment delays meant they had to wait up to three months to get their money.

The study was slipped out on the DWP and HMRC websites on Thursday morning – even though the report itself is dated November 2017, and the research was carried out between October 2016 and July 2017.

Hundreds of thousands of tax credit claimants will move on to universal credit under so-called managed migration over the next three years, amid concern that many will be unprepared.

At the time the report was finalised, the then work and pensions secretary, David Gauke, was deciding whether to pause the rollout of universal credit in the face of widespread criticism that the six-week wait had impoverished many claimants and forced them to rely on food banks.

Gauke elected to press ahead with the rollout, declaring at Tory party conference in October 2017 that universal credit was “working”, and announcing changes to head off a backbench revolt. The government has subsequently made further changes to try to mitigate the long payment waiting times.

Ironically, Frank Field, chair of the commons work and pensions committee, accused the DWP at the time of “withholding bad news”, claiming that Gauke only gave the go-ahead to universal credit because officials “had withheld the true scale of the problems”.

Margaret Greenwood MP, the shadow work and pensions secretary, asked why the government was only now publishing the findings. She said: “Universal credit should be helping people out of poverty; instead it is pushing many people into debt and towards food banks. The government must take notice of its own research and stop universal credit as a matter of urgency.”

Gillian Guy, chief executive of Citizens Advice, said: “This isn’t a surprise to us, despite the data being a few years old. This tallies with experiences of the people we’ve helped who have struggled financially when they’ve been moved on to universal credit.

“While the government has made some changes to support people moving on to universal credit since this research, these do not go far enough. Half of the people we help while waiting for their initial payment are unable to keep up with bills or rent.”

The DWP referred an approach for comment to HMRC, which cited improvements to universal credit. A statement said: “Since January 2018, customers can get an advance of up to 100% of their estimated monthly UC entitlement while they wait for their first payment.”