Call me dumb, but, I never really saw the connect between denial of Legal Aid and the decimation of the welfare state, even though I was denied any kind of legal help when my husband was [first] found “fit” for work. I had to learn [and quickly] how to appeal and what to do when denied benefits. I was a lay person back in 2013, now I have learnt a lot and been able to help others with their DWP appeals.
How true Prof. Alston’s words are:

“the glue that has held British society…has been “deliberately removed and replaced with a harsh and uncaring ethos”.

Only this week: hypocritical leaders have been “celebrating” 75 years since D Day, even though they couldn’t give a toss about the rights of the ordinary people that they sent out to fight the war[s]. I think this cartoon says more than I ever could.

“Politicians who took us to war should have been given the guns and told to settle their differences themselves, instead of organising nothing better than legalised mass murder.” Harry Patch, The Last Tommy 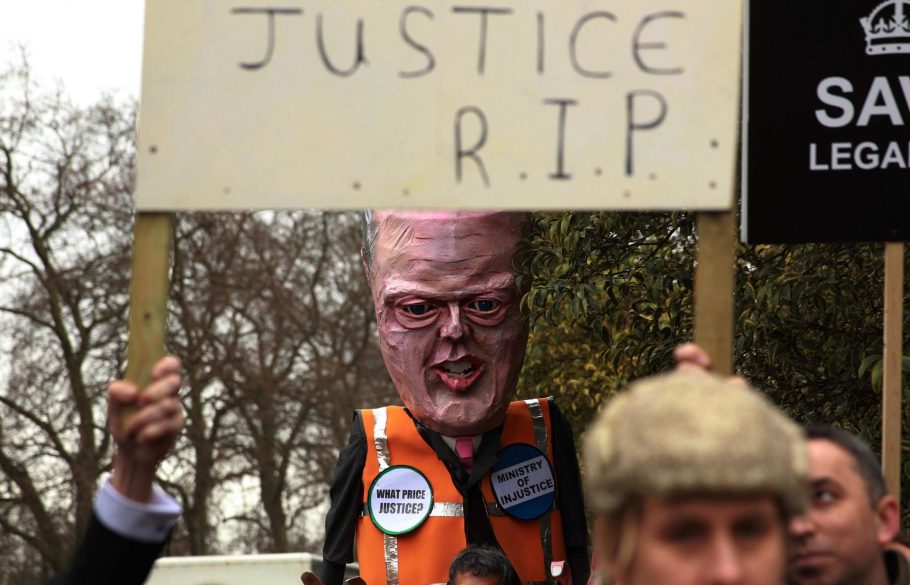 In the first of a series of reports examining the impact of the 2013 cuts to legal aid, Jon Robins sets out how the erosion of ‘access to justice’ for huge swathes of social welfare law is having a very real impact on poverty in the UK.

This week, the Chancellor, Philip Hammond, brushed aside evidence of the “systematic immiseration of millions” in our country by the UN’s expert on poverty – as did his cabinet colleague, Work and Pensions Secretary Amber Rudd, who last week dismissed the finding as ‘barely believable’.

No great surprise from a Government not overly-enamoured with experts.

Following months of research, Professor Philip Alston, the UN’s Special Rapporteur on Extreme Poverty and Human Rights, visited the UK last November and found – according to his final report published at the end of last month – that one in five people are living in poverty, and that close to four in 10 children would be within the next two years.

The 2013 legal aid cuts represent the death of an idea: the right of everyone to be treated fairly by the state no matter what their income.

The Australian lawyer invoked Thomas Hobbes to say that these people’s lives were likely to be “solitary, poor, nasty, brutish, and short”.

For good measure, he damned austerity as “an ideological project”, called Brexit “a tragic distraction”, and said that the Department for Work and Pensions had been been tasked with building “a digital and sanitised version of the 19th Century workhouse”.

It was striking – but barely noted – that Prof. Alston identified the “dramatic rolling back” of legal aid as one of the causes of our country’s “systematic” impoverishment. Here, he was specifically talking about the impact of the 2013 legal aid cuts.

The so-called LASPO cuts – introduced through the Legal Aid, Sentencing and Punishment of Offenders Act by then Justice Secretary Chris Grayling – eviscerated what remained of our system of publicly funded legal advice.

Many commentators seem to treat the ‘legal aid crisis’ as being almost exclusively about our ‘broken’ criminal justice system. Of course, it is true that our criminal courts are close to collapse (the inevitable consequences of which I explore in my Byline Times column, ‘The Justice Trap‘) and barristers are once again talking about downing wigs and going on strike.

The impact of the devastating LASPO cuts tends to be overlooked.

Since October last year, I have been working on a project looking at the state of ‘access to justice’ in Austerity Britain. Together with Dr Dan Newman, a law lecturer at Cardiff University, we have been investigating the impact of the 2013 cuts on a threadbare and fraying safety net of advice agencies, and following what happens to the people falling through the gaps.

I have visited law centres, courts, community drop-ins in church halls, food banks and MPs’ surgeries, talking to people about their experiences of a failing justice system.

A ‘legal aid advice desert’, as defined by the Law Society, is an area where there is no legally aided help available or else there is just one provider.

The solicitors’ group reckons that almost one-third of legal aid areas in England and Wales now have one or no local legal aid housing advice provider.

The UN Special Rapporteur’s study reports that the number of civil legal aid cases are down by a “staggering” 82% since 2010.

A new campaign must be launched to preserve the idea of meaningful ‘access to justice’ and the place for it within the welfare state.

Beyond the figures, the 2013 legal aid cuts represent the death of an idea: the right of everyone to be treated fairly by the state no matter what their income.

The political consensus around the need for state-funded ‘access to justice’ –undermined by successive governments – was dealt a fatal blow by David Cameron’s Coalition.

In recent years, it has occasionally been said that legal aid is “a forgotten pillar of the welfare state“. But, this wasn’t the role conceived for it by the Attlee Government. The welfare state comprises Beveridge’s four pillars: the NHS, universal housing, universal education, and state security. The idea was that people needed recourse to a properly funded system of legal advice so that their rights to such vital services could be enforced through the courts if necessary.

Prof. Alston’s report is to be welcomed. It reinforces the connection between legal aid and the welfare state.

In his report, the rapporteur speaks of “the glue that has held British society together since the Second World War” which has been “deliberately removed and replaced with a harsh and uncaring ethos”.

“As a result, many poor people are unable to effectively claim and enforce their rights, have lost access to critical support, and some have even reportedly lost custody of their children,” the report said. “Lack of access to legal aid also exacerbates extreme poverty, since justiciable problems that could have been resolved with legal representation go unaddressed.”

It’s not a popular cause. The Guardian columnist Jonathan Freedland memorably described legal aid as the “most friendless wing of the welfare state“. Unlike schools or hospitals, it seemed “technical and remote” to all but those who had to rely upon it, he wrote in 2006.

It was striking – but barely noted – that Prof. Alston identified the “dramatic rolling back” of legal aid as one of the causes of our country’s “systematic” impoverishment.

Post-LASPO, a new campaign must be launched to preserve the idea of meaningful ‘access to justice’ and the place for it within the welfare state. Some work has begun.

The Bach Commission on Access to Justice, set up by the Labour peer Lord Willy Bach in 2015, is backing a new Right to Justice Act to codify existing rights and to create a new right for individuals to “receive reasonable legal assistance without costs they cannot afford”.

Over the coming weeks, I’ll be reporting for Byline Times from the frontline of our failing justice system on how the cuts to legal aid are effecting people’s everyday lives.

6 thoughts on “How Legal Aid Cuts are Causing Systematic Poverty”