Health secretary Matt Hancock has refused to apologise to the relatives of elderly residents who died of coronavirus in care homes, as fresh figures showed more than 5,000 fatalities in England alone.

The new figures from the Office for National Statistics and Care Quality Commission put the UK on track for a higher overall death toll than Italy, Spain or France, lagging only behind the US. And experts warned that deaths in care homes may not yet have reached their peak, with one suggesting that they could be running at as much as 400 a day – around the same as are occurring in hospitals.

Mr Hancock announced a dramatic expansion of testing availability for all care home residents and staff, as well as for over-65s and their families in the community who show symptoms of Covid-19.

And he announced that from Wednesday, daily tallies of deaths in care homes will be announced alongside the statistics on hospital fatalities, rather than being released on a weekly basis some 10 or 11 days after the event.

But he told the daily Downing Street briefing on the outbreak that it was “unreasonable” for a reporter to ask if he would apologise to the families of those who have died. “I think that’s unreasonable as a question,” said the health secretary. 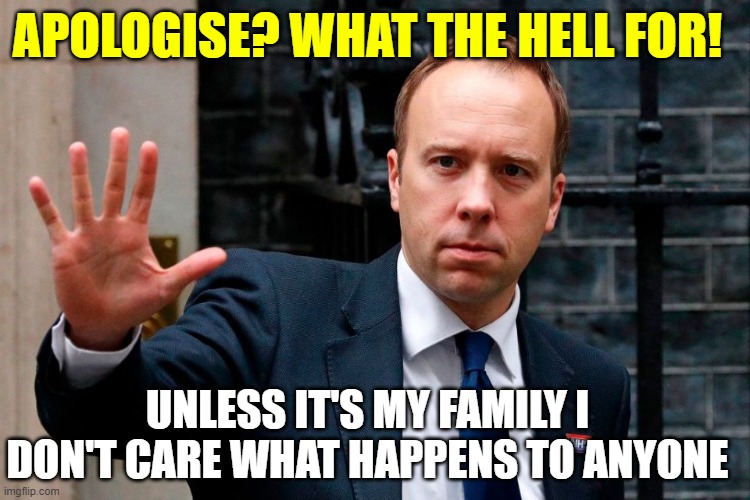 Earlier in the day, Mr Hancock refused to accept mistakes had been made in the provision of personal protective equipment (PPE) after he was challenged by the son of hospital consultant Abdul Mabud Chowdhury, who died just days after issuing a plea for more kit to keep medics safe.

When Intisar Chowdhury asked on an LBC radio phone-in why the government did not heed his father’s warning, Mr Hancock replied: “We took very, very seriously what your father said and we’ve been working around the clock to ensure that there is enough protective equipment.”

During the pandemic, 82 NHS staff and 16 social care workers have lost their lives after being infected with Covid-19. According to the latest statistics published by the ONS, there have been a total of 2,906 deaths involving the novel infection in English care homes up to 17 April. And data from the CQC showed an additional 2,375 coronavirus-related care home deaths between 18 and 24 April, bringing the total to 5,281.

This comes on top of the 21,678 fatalities recorded in hospitals, after 586 deaths were reported on Tuesday, bringing the total UK tally to at least 26,959. Chief scientific adviser Sir Patrick Vallance said early in the outbreak that a death toll of 20,000 would represent “a good outcome”.

Professor Sir David Spiegelhalter, chair of the Winton Centre for Risk and Evidence Communication at the University of Cambridge, said the latest data also revealed 5,000 excess deaths in the community that were not listed as Covid-19 compared to the five-year average.

He said: “I would not like to say there has been a peak in care homes and care homes are running at about 300 or 400 deaths a day. Given what we saw with English hospitals running at about 450 deaths at the end of last week, I would push my neck out and say it is plausible that there are now as many Covid-19 labelled deaths occurring out of hospital as in in hospitals in England.”

Earlier in the outbreak as part of efforts to free up NHS beds, care homes were told they would have to take hospital patients even if they tested positive.

Carl Heneghan, director of the Centre for Evidence-Based Medicine and a practising GP, said he could not understand the clinical reason for that and warned care homes may have been “seeded” with coronavirus.

“There has to be a clear message to hospitals that nobody with active infection should be discharged from a hospital into a nursing home.”

He described Covid-19 in care homes as a “perfect storm” with staff having only poor quality protective equipment leading to a “cascade” of infections.

The chief executive of the Nursing and Midwifery Council, Andrea Sutcliffe, said the figures shone a “devastating spotlight” on the impact of Covid-19 on vulnerable people outside hospitals.

“This pandemic has exacerbated the many issues that care homes, social care nursing and community services were already battling, including high vacancies, increased demand and the impact of a fragmented, disconnected system,” said Ms Sutcliffe.

“It’s clear that social care is just as much the front line of Covid-19 as the NHS. And that means, as we’ve always known at the NMC, the contribution of nurses and nursing associates working in social care is critical and the right support and recognition are absolutely vital.”

The health secretary defended the decision not to restrict access to care homes sooner. Mr Hancock said: “The critical thing is that in a care home having visitors also has a positive impact both against the loneliness of the residents but also on their longevity and their mental health.

“So these are difficult judgements and there are no easy recommendations to make. “We were guided by that clinical advice and when it was necessary to make that change, which is quite a firm change, then we did so.”

But she said: “Further action is urgently required to reduce the spread of the virus and keep care users and staff safe. More needs to be done to ensure all care staff get the PPE they need and to ensure social care is properly funded to deal with the extra costs of the pandemic. The government must also introduce a strategy for intermediate care, to prevent the spread of Covid-19 by people who are discharged from hospital and help struggling care homes.”

And acting Liberal Democrat leader Sir Ed Davey said: “The government’s failure to make adequate preparations adds to the mounting evidence demonstrating the need for an inquiry into the handling of Covid-19. The government must commit now to holding a future inquiry to restore waning confidence.”​

2 thoughts on “Not my relatives: why should I apologise”